The next lock I tackled in Tim's 2nd book was this lock.  Here is how the finished lock looks in Tim's book... This lock utilizes a 1/2" threaded rod and nut....I only had a 3/4" tap and die set.  I thought about redesigning the lock to fit the 3/4" thread...but it would cause me to have to redesign the entire lock. I decided to order the 1/2" thread tap and die set..which I received a couple days ago.

On a Google search, I found this info on screw key locks...

The example below is typical of a screw key lock. This one happens to be ornamented with intricate carving, but the general shape is typical. Variations in size for this type of lock can be extreme since they have been used for everything from handcuffs to leg irons to securing gun barrels in an armory. There are many replicas available today and the construction is usually very crude. The author says the screw key lock is one of his toughest locks to build...and he is right! It is tough because:

-You have to glue up blanks for the 2 end caps, the main lock body, and the shackle.
-The 2 end caps and lock body have to be turned on lathe
-There is a lot of hand work cutting out the openings in the 2 end caps
-You have to cut male and female 1/2" threads
-The parts are very fragile and may break on you (1/4" wall thickness on end caps)

Here is a picture of gluing up the end cap blanks sawn on the band-saw to roughly 3" diameter to net 2.5" diameter on the lathe. Each 3/4" thick piece is actually made of 2 pieces glued together first.  I made this from walnut logs I got from Lloyd Wells. Here is blank glued up of 3/4" maple to make hasp: Here is (4) 3/4" thick maple boards glued up to 3x3" square to turn down to a net 2" diameter for main body of the lock.  I should have sawn or draw-knifed the 4 corners down before I put it on the lathe to reduce the un-balance of square stock...this chuck of wood made my old 1939 Montgomery Wards wood lathe jump up and down until I got it round! Because of the excessive vibration, the tailstock point wallowed out the end so the tailstock was not really supporting the piece.  It did not hurt anything, but it points out another advantage of squaring the 4 corners before putting it in the lathe to reduce vibration.

Here is the key, the swing bracket for the hasp, and the 2 threaded pieces.  I made the threaded nut from oak, in this photo, it has not been cut to 1" round yet. I had a 3/4" threading kit, but since this plan called for 3/4" wood threads...I had to buy a new kit.  I set the depth to maximum on the tap.  I sanding the OD of the threads in the lathe to get a lower friction joint. I also put the threaded rod in the drill press at lowest speed...and use a small file to cut the threads deeper to get a lower friction joint.  I used linseed oil as my thread cutting lubricant on both pieces.  I used Johnson Wax to also reduce friction.  The key end is made from red African padauk wood to give some color variation to the assembly. Here we are starting to turn the ID of one of the end caps. I had to temporarily position a trouble-light so I could see what I was doing inside the piece.  I used a round nose bowl tool and the parting tool to cut the ID.... Ooooops.....the thin 1/4" section of the end cap cracked on the lathe.  I was able to glue it back up and salvage it per the photo below.....the crack is the white line where I wiped the residue glue away with a wet rag... Drilling the main body of the lock on center is critical to this project.  I used this nifty blue plastic tool to make 2 lines ....and intersection is the exact center of the piece... Since the drilling set-up is critical to the success of this lock...I copies the author's suggestion to make a separate fixture box...and clamp the piece in the corner so it is vertical.  Worked fine....as long as you have the Forstner bit extender to drill deep enough: I bought a 4" extension for Forstner bits from Amazon (made by Irwin)....and it is invaluable to have this extension for drilling these locks.  Otherwise I can not drill deep enough. I am going to order some longer extenders for future projects.

And here is the screw key lock before final gluing and sanding..... And here is the finished screw key lock...... 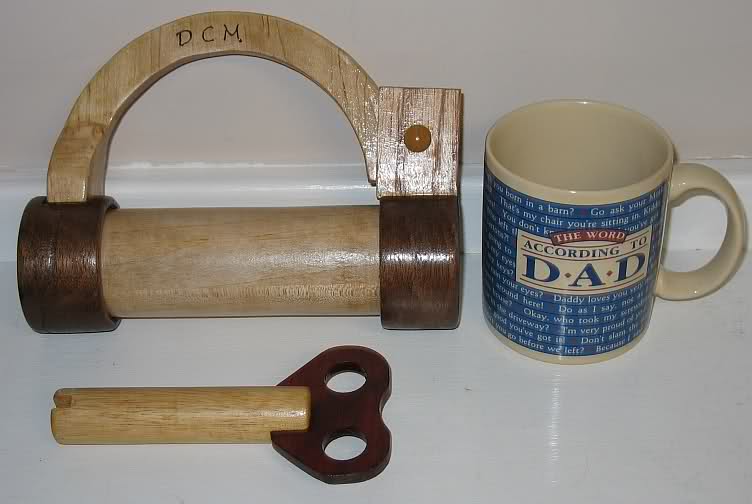