When I was a kid on the farm, I used an old power hacksaw to saw steel. My dad used it a lot to build and repair farm related steel items. At some point, he put it in storage in the old chicken house and used a table-top band saw instead. After 10+ years in storage in the shed, I retrieved it to refurbish it. I think Dad bought the saw from neighbor Clark Bentley when he retired and sold out his things at his farm sale. This was in the mid 1960's sometime.

The old saw was covered with black grease and dirt: I dis-assembled the saw,  then put the components (except the 1/4 HP 1750 RPM electric motor) onto the tailgate of my F150 pick-up. I sprayed down the components with WD-40 to remove the grease. I then took the truck to the carwash and power washed the saw components.  When I got home, I used a paintbrush and paint thinner to remove the oil/grease the car wash did not remove.

Inspection of all the parts found that the main crank arm was cracked very badly and close to failure: As the picture shows, the right hand side is cracked severly. This drive arm is all cast iron except the 5/8" steel shaft shown on the left hand side.  Since the cracked portion has to have a good OD and ID, taking it to a weld shop to repair is probably not an option. I drew up the original cast iron design in Google Sketchup, so I could design a steel replacement arm: Since I do not know how to weld, I designed an all-steel replacement that I could fabricate with no welding: I chose Option #2 as the replacement design since it is easier to fabricate. I also used steel sizes available from McMaster-Carr. I also designed the replacement so it could be welded by the weld shop in case my 3/16" drive pins shear off too easily. I over-laid the new design on the old design to make sure it would work ok: I had to order steel from McMaster-Carr and reduced-shank drill bits from another company before I could make the new crank.

The electric motor wires were so worn that they were contacting each other. I was able to remove the end plate from the motor and nip the wires back to the point they still were good, or had insulation on them.  I made a pigtail and with the end cover loose, the old motor ran!!!  However, the shaft was tight on the motor before I dis-assembled it, and the motor would stop as I tightened up and drew down the end cap bolts. As far as I know, electric motor shafts must turn freely when they are assembled.  I don't know why this old motor was so tight.  I ended up grinding the shaft OD down using my Dremel with a 1/2" sanding drum, then polishing with emery cloth. Once the shaft was free in the assembled condition, I added a switch and new power cord.

I entered the complete design of the power hacksaw into Google Sketchup: I also made an animation of the saw running:

The gearbox has either a 19:1 or 20:1 speed reduction ratio as per counting the crankshaft arm shaft rotate 1 revolution while turning the pulley.

I'm going to paint and assemble the saw using the almost broken crankshaft arm, and see if it will last long enough to saw the pieces I need to fabricate a new crankshaft arm.

I cleaned the speed reducing gearbox with paint thinner and made a new paper gasket so it would hold oil as the lubricant: Next I made the replacement crankshaft arm from steel. I have been doing all woodworking for several years.......with my drill press set to max RPM for drilling and sanding...I never change speeds.  I forgot when metalworking and using big bits, you have to slow down the RPM !!

I used a 3/16" bit for the dowels to hold it together.  The 3/16" bar stock from mcmaster-carr drove/pressed right into the drilled holes fine.  I ended up using 3 dowels on big shaft driver to make sure it would not break in service. When I assembled the new crank piece to the saw assembly, I had some interference between the arm and the 2 L-brackets that mount the gearbox.  I shortened the length of the arm about 7/16" and got adequate clearance. I also had to slightly shorten the shaft on the driven end.  Always a little Field Engineering required

And here is the new arm installed on the saw: And here is the completely refurbished saw: 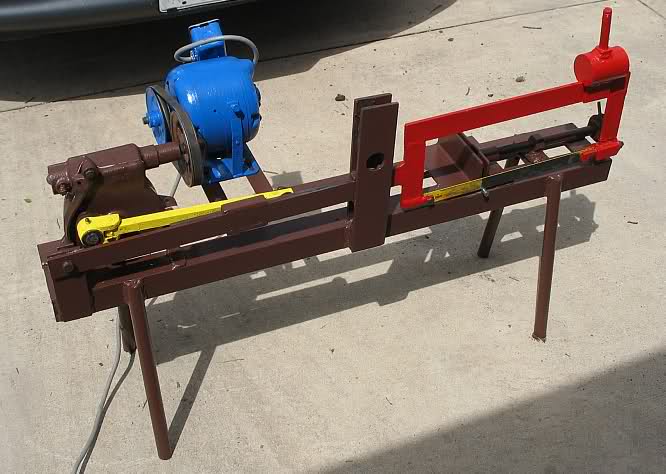 Here is a YouTube video of the refurbished saw while it is sawing a 3/8" steel bolt:

Concluding thoughts on this project:

It took longer than I thought to draw this saw in Google Sketchup.  But, there is a lot of pieces if you count every nut and bolt. The refurbished saw works now just as good as it did in the 1960's when I used to run it as a kid!!  It is ready for another 50 years of service.