My sister Karen asked me to make some fire engines to sell at an upcoming charity auction to raise money for a new fire house.

I searched Google's warehouse and found an existing Sketchup plan for a neat looking wood fire engine. It was done by Ron Fritz who has a web site with many plans.

Here is the Google Sketchup of the fire engine: The plan calls for a double angled engine/hood. I experimented making 2 separate pieces and I could not get them to mate well. I simplified the design and make the hood/engine just one angle. I used this jig to saw them out: I used this jig to saw the curved top of the cab in the band saw: The cab has a lot of individual pieces. It takes a couple steps to glue and clamp up all the pieces: The Sketchup plans called for 1/8" deep by 1/4" wide rabbets on both the cab and bed. I did not see a way to safely make these because there is so little material to hold onto for using a table saw or router. I emailed the designer, he said he used a table saw...but he had built some with no rabbets and they worked fine. I decided to skip the rabbets because of safety. I made the truck bed in 2 pieces versus 1 rabbetted piece: Making the little ladders was a challenge. I sawed out the 1/4 x 1/4 inch sides from a larger piece on the table saw. I sawed the 1/8" dowel rungs on the scroll saw. I made the rungs too long on purpose, then sanded them flush with the belt sander. And here is the final assembly stage: And now for the finished fire engines: And now the completed fleet of fire engines: Closing Thoughts on the Fire Engines:

This fire engine design has at least 33 pieces, so it takes a while to cut the pieces and build it. I bought the spoked wheels and the headlights. The spoked wheels were confusing. I wanted 1/4" axles and online description said 1/4".....but when I got them there were 2 different diameters, 1/8 and 1/4....to fit axle pegs with 1/8" diameter and 1/4" head. I just drilled out the axle hole to 1/4" on the drill press.

The finished fire engines are cute and my compliments to the designer. My sister asked me to design and build some small wooden ladders for the firetruck she recently purchased. Here is my hand drawn sketch for designing these ladders: 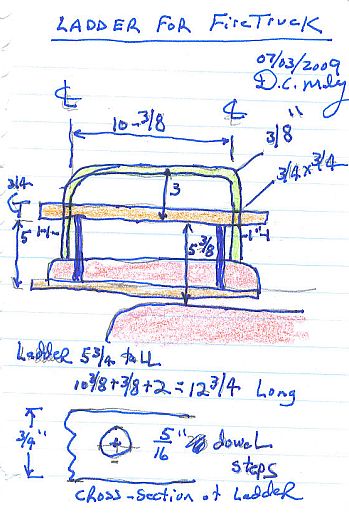 Here are photos of the firetruck before I made the ladders for it: 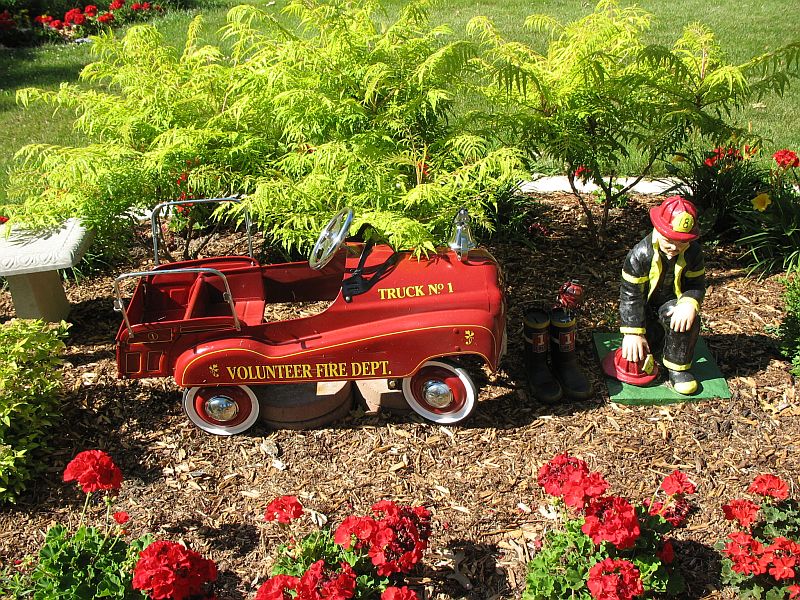 Here are the new ladders.  I used linseed oil to keep the natural wood look: 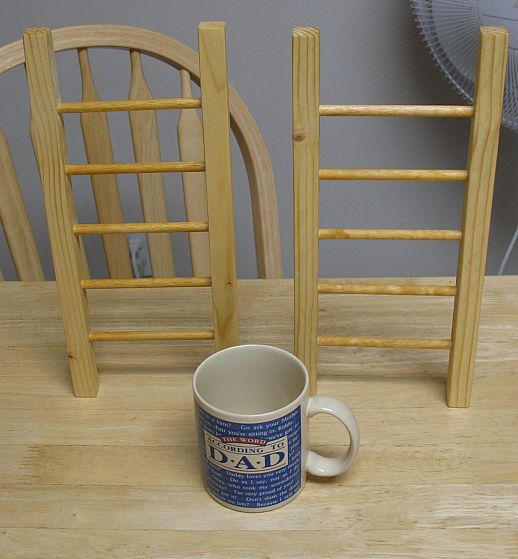 And here are the new ladders on the firetruck: 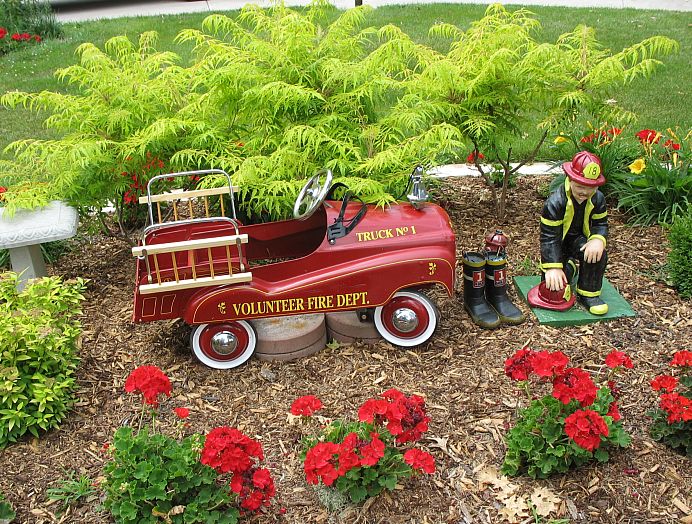 It will be interesting to see how the pine ladders with linseed oil hold up over the summers to come.

On the small fire engines, I always wanted to letter "Fairbury Fire Dept." on them, but did not  know how to make such small letters.  I found that Hobby Lobby has fine point paint pens that can permanently mark wood. I tried the black fine-point paint pens on one of the little fire engines, and it worked great!! Closing Thoughts
There are at least 33 pieces in each fire truck, so it takes a while to make them. The paint pens allow you to letter them using relatively small letters.